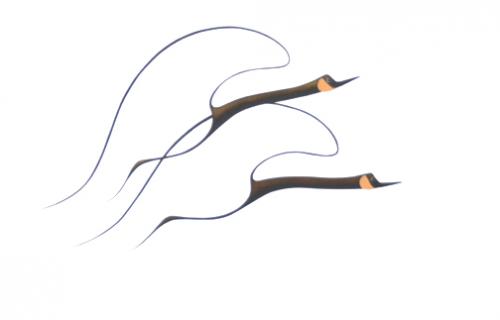 The Cree painter, Isaac Bignell, grew up at the junction of the Saskatchewan and Pasquia Rivers, four hundred miles north of Winnipeg Manitoba. His community had been a meeting place for early aboriginal peoples for thousands of years.

Isaac said, ” I was brought up to live off the land…to hunt, trap and live in harmony with the earth. That life taught me to respect animals and the spirit and power of nature. My art is strongly influenced by the traditional ways of my people.”

Primarily a self-taught painter Isaac worked through various techniques until he developed a distinct fluid style that speaks of the spiritual foundation behind the imagery.

He also loved to dance and was associated with numerous native drum and dance groups. He was quoted as saying, “I hoop-dance and sing Pow Wows to maintain my cultural heritage. Through art and dancing, I attempt to influence Native people to continue their cultural ways; the gift that was given to us by the Great Spirit.”

Isaac Bignell died at the age of 35 years from the effects of a concussion after falling down a flight of stairs. He was the devoted father of three.

1 in stock (can be backordered)