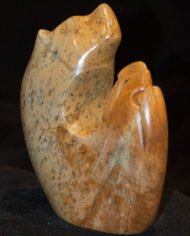 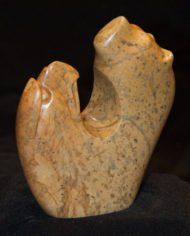 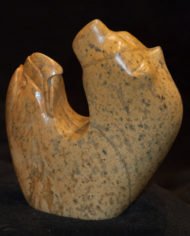 Freedom, courage, considered the protector, carrier of prayers, visions and spirits. Eagle is one of the most important beings in the art and mythology. It is respected for its intelligence and power, as well as its extraordinary vision in both the literal and figurative senses. Eagle clan families are traditionally the most prominent, and Eagle chiefs the most powerful. Eagle spirits are associated with lofty ideals and the pursuit of freedom.

The Bear is a healer and a giver of good medicine. A protector and symbolizes physical strength and leadership, learned humility, and a teacher.

It is considered to be a close relation of human-kind, because of its physical characteristics such as size, appearance, expression, and behaviours such as standing on two hind legs, gathering plants and berries, fishing and nurturing young. As a close relation, the bear is a link between the human and non-human animal realms, as well as between the secular natural real and divine or supernatural. Because of their strength and fierceness, bears are frequently the guardians, protectors in helping spirits of warriors. Bears are a well respected member of their communities.